Gaming laptops are like sports cars, you don’t necessarily need them but those who want it will have them no matter how expensive they are. While reviewing the ROG Zephyrus Duo 15 SE, I had a similar feeling. Starting at Rs 3,00,000, the Zephyrus Duo 15 SE not only caters to hardcore PC gamers but also targets content creators and YouTubers. Yes, powered by AMD’s new Ryzen 5000 mobile processors and Nvidia’s GeForce RTX 30 series GPUs, the dual-screen gaming laptop is ridiculously expensive. But while some might call it a niche product, the fact is there are takers for premium gaming notebooks in India.

In this review, I am going to share with you my experience of using the Zephyrus Duo 15 SE and what you would get by paying for a notebook that costs a year’s salary for a young trainee.

Even though this is a ROG-branded (Asus’ line of gaming notebooks and smartphones) laptop, the Zephyrus Duo is identical to the ZenBook Pro Duo 15 OLED, the gusty notebook I reviewed recently. But there are cosmetic changes between the laptops — the latter one is targeted at pro-level consumers.

Anyway, the Zephyrus Duo has a matte black chassis with tempered edges, while the lid is covered with a dot matrix pattern alongside the ROG logo. If you look at Asus’ recently released gaming laptops, the design language has started to appear more subtle in favour of ultra-aggressive styling. 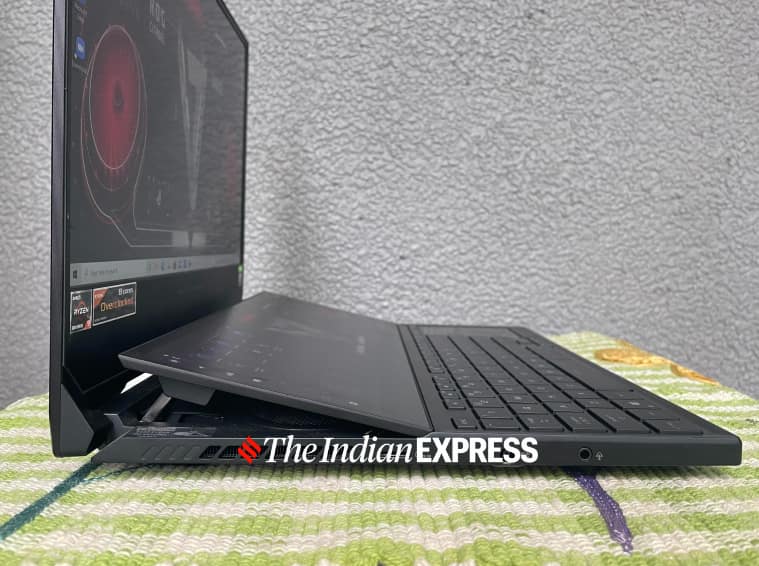 The notebook is still on the heavier side, weighing in at 2.48 kg. I must say the gaming notebooks of today look and feel a lot lighter. The Zephyrus may be heavy but it fits in the usual work backpack designed for 15-inch and above laptops.

Mind you, this is a desktop-level laptop so even if it is a bit heavy, the form factor makes a lot of sense. I don’t mind taking this laptop to launch events to file stories from the venue. It still looks professional yet it has the wild side to it, which will appeal to gamers. 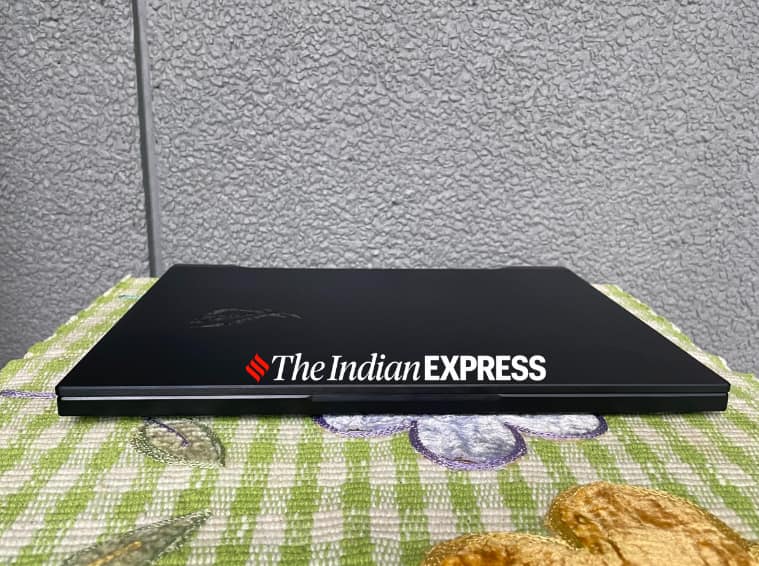 The notebook looks professional yet it has the wild side to it, which will appeal to gamers . (Image credit: Anuj Bhatia/Indian Express)

As I said, it’s not fixed and instead raised a bit to provide a better viewing angle. The idea is to provide improved airflow, although I see top-mounted speakers underneath the ScreenPad and not grills for air. I must say Asus could have trimmed the side bezels of the secondary screen. This would have created additional space for the keyboard, which now feels cramped.

Connectivity-wise, you have got two USB-A 3.2 gen 2 ports and a USB-C 3.2 gen 2 port for driving external displays and charging on the right. On the right, there’s a microSD card reader, a 3.5mm combo audio jack, along with Asus’ proprietary power port. The laptop also comes with an Ethernet port, a full-sized HDMI port. Plus, the ROG Zephyrus Duo also supports Wi-fi 6 as well as Bluetooth 5.2.

The primary screen here is 15.6-inches with a resolution of 1920 x 1080 pixels but has a smooth 300Hz refresh rate. The full HD display is sharp for gaming and anything else. The display is pretty good, and photos, websites, streamed content and YouTube videos look great. I am not too sure whether graphics designers and video editors will appreciate this display, but since they care about the wider Adobe RGB colour gamut and DCI-P3, I suggest they choose the latest ZenBook Pro Duo over the ROG Zephyrus Duo 15 SE. There’s no webcam, which is a bit puzzling at a time when everyone is increasingly dependent on remote work. The keyboard has plenty of travel and comfortable key spacing, but it feels a bit cramped. . (Image credit: Anuj Bhatia/Indian Express)

The keyboard of course sports RGB lighting, something one should expect from a gaming notebook. But the layout of the keyboard and the touchpad is a bit controversial in my opinion. Because the ScreenPad Plus occupies a large portion of the deck, Asus was left with no choice but to somehow fit the keyboard.

This resulted in a keyboard that feels squeezed and crammed. Though I never had trouble typing on the keyboard, the lack of space to rest down your wrist as you type annoyed me a lot. Ditto for the touchpad, which is vertically aligned. The touchpad, located on the right, is responsive but sometimes navigation can be an issue. The tiny touchpad doubles as a number pad with a long press on the top left corner. It is actually useful in certain games, especially when playing Overwatch. 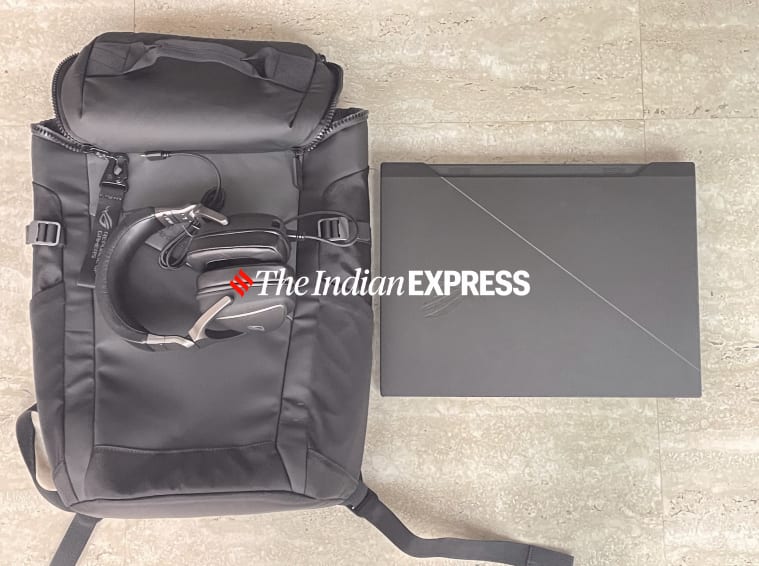 My review kit included the laptop itself, a high-quality ROG-branded backpack, an external webcam, and a pair of gaming headphones. . (Image credit: Anuj Bhatia/Indian Express)

What is the use of the ScreenPad Plus in a gaming laptop? I asked myself. Well, after using the Zephyrus Duo 15 SE for over a week, I have an answer but not the one you might expect. 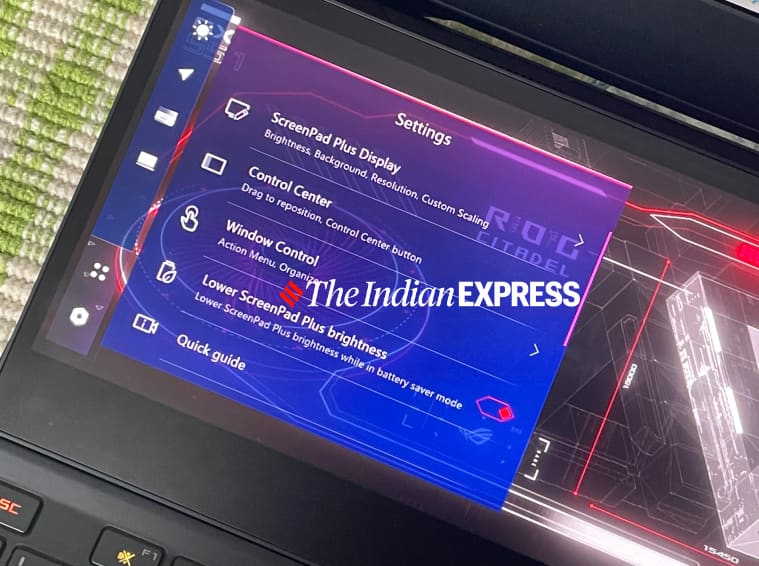 The are several ways to use the ScreenPad+.. (Image credit: Anuj Bhatia/Indian Express)

The speakers and microphones are amazing on this notebook. Although not the 16-inch Macbook Pro level, the speakers get really loud without any distortion at a higher volume. The microphones were also improved, enough to make your zoom calls much clearer.

Inside, you have got a Ryzen 9 5900HX processor, 32GB of memory, 2TB of SSD storage, and GeForce RTX 3080 GPU. This is the highest-end version Asus is selling in India and I got the same variant to review. A machine like this has to be the best-in-class and that justifies the price tag it commands. I ran Forza Horizon 4 and Sea of Thieves — both available on the Xbox Game Pass. Games were quick to load and I hardly saw frames dropping. Once plugged in, the gameplay was smooth and stutter-free. Let me tell you this is not the machine that tests your patience. 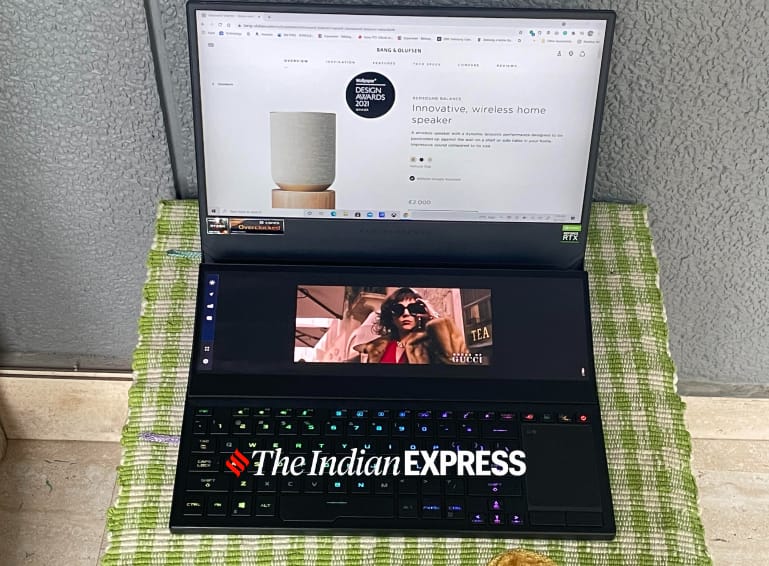 The Zephyrus Duo 15 SE gets between four and five hours doing productive things. This was when I used the laptop purely for work and nothing else. Gaming will suck battery life at a faster rate. Expect the laptop to get warm after intense gaming sessions, and that’s okay with a device that is intended for that purpose. Asus ROG Zephyrus Duo 15 SE review: Should you buy it?

I know choosing a laptop, especially a gaming laptop, is getting hard these days. But the Zephyrus Duo 15 SE isn’t for those who spend their money consciously. This notebook is for those who want the best one, and who have surplus money to splurge on Louis Vuitton bags and the ROG Zephyrus Duo without a second thought.