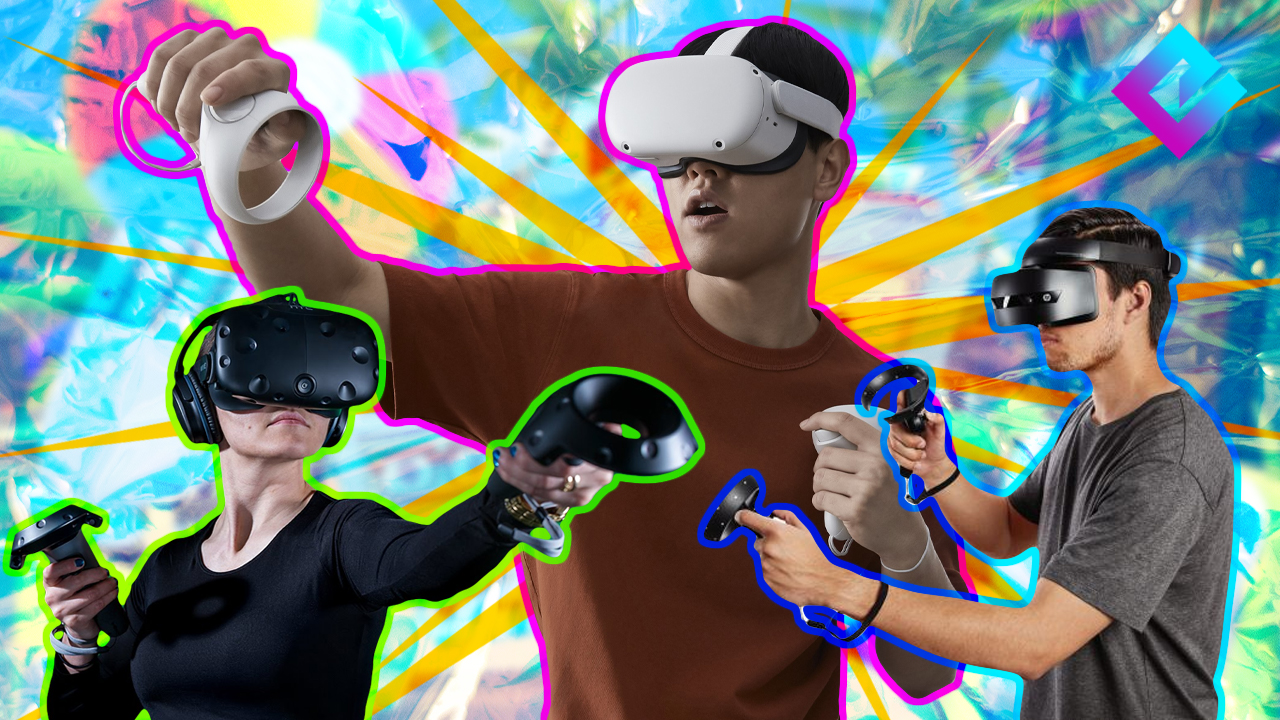 Virtual Reality is still heading into the norm, and while it doesn’t seem like many players own a VR Headset, the truth is that a large number of players on the Steam Hardware survey own one. According to the survey, it seems that the headset of choice is the Oculus Quest 2.

For those who are unfamiliar with the Steam Hardware survey, the survey is conducted every month to judge what the most popular hardware is among its customer base, while completely anonymous and voluntary, the survey does give an interesting insight into what the most popular computer hardware is on the platform. When discussing things like OS, obvious systems like Windows 10 make up 90% of the PC environment. Also according to the survey, the most common GPU is the NVIDIA GeForce GTX 1060. However, when it concerns VR Headsets, a surprising amount of players use the Oculus Quest 2 for their PC VR setup.

With the Quest 2 sitting at 32% of the PC VR landscape on steam, it comes in first, with the Rift S sitting at 17% and the Valve Index coming in at 16%. These are the top 3 headsets, however, only two of them are available to purchase. This is due to the fact that the Rift S was discontinued much like the Original Oculus Quest and the original Rift. This, however, isn’t without reason, as the strategy behind making the Quest 2 the only Oculus VR set available makes for a perfect entry into Virtual Reality. The Index is sitting at a price of around $1000, and the Quest is sitting at a price of $300.

The point behind this is that the quest can do everything that all the previous headsets are capable of, all while being wireless, and at an affordable price. The Quest 2 is also able to be used without the need for base stations or a PC, unlike the Index, which is geared more towards VR enthusiasts on the platform. The Oculus Quest 2, which is capable of linking to the PC through Wifi or a cable makes for some of the easiest to set up VR Experiences for both non PC and PC gamers. Letting players enjoy the headset without the need for external devices. However, the price is the real selling point for the PC VR landscape, as the Steam Hardware survey is looking at PC VR only, and with the fact that not only is the Quest 2 able to connect to a PC running Steam VR, but is also priced at a competitive selling point, this is a go-to headset for new users. But with 1/3rd of all PC VR users owning a Quest 2, what does that mean for the future of VR on PC?

Surprisingly, it isn’t setting a precedent for PC VR to be taken over by Oculus, but it does mean that VR manufacturers are going to have to compete with the Quest, however, there are two things that are going to keep the quest in the frontrunning for VR in the future. Wireless play, and their lineup of titles. Consider that the Quest 2 can run Quest Link, a wireless Wifi solution to VR without the cords, something that the Index is unable to do. While not perfect, the ability to play high fidelity VR titles over Wi-fi is something that a Lot of VR Players want, being that full free range motion is limited in the VR consoles, being that the possibility of tangled wires is a real possibility, also including that the current solution is to hang the wires from the ceiling, this means a dedicated play space is needed for players to use in VR. However, with something like Quest 2, this is obsolete, as the Quest 2 is powered by a battery, not a cable. Also included is the Oculus store, and while Steam is the king for VR titles, Other manufacturers are going to plan their own oculus styled store, like HTC with the Viveport. But the limited amount of games means that players are going to opt to use their headsets with steam instead.

As of right now, the biggest competitor to Oculus is Valve themselves, with the Index, while being high priced, blows the Oculus Quest 2 out of the water with everything that the Index can do, however, if Valve were to make a second Index with the ability to play games from the Steam library wirelessly, or opt to make a wireless attachment for the index, and sell this hypothetical headset at a competitive price to the Quest, this would make for some serious competition in the VR landscape.

When making investment decisions, sentiment gives a good review of what stocks financiers presently favor. Belief incorporates temporary technical analysis right into its rating as well as does not incorporate any essential evaluation such as earnings of the firm. This implies that revenues updates and also other information can considerably influence total belief. Price activity is normally the very best sign of view. For a stock to increase, financiers need to really feel good regarding it. In a similar way, a stock that is in a drop should be out of support. InvestorsObserver's View Sign considers price action and recent trends in quantity. Increasing quantities often indicate that a fad is enhancing, while decreasing volumes can signify that a reversal could come soon. The options market is one more location to obtain signals regarding sentiment. Since options enable financiers to place bets on the cost of a stock, we consider the ratio of telephone calls as well as places for stocks where options are readily available. What's Happening With CLOV Stock Today? Clover Wellness Investments Corp (CLOV) stock is trading at $3.19 since 11:11 AM on Wednesday, Aug 3, a rise of $0.09, or 2.74% (clov clover health)   from the previous closing cost of $3.10. The stock has actually traded between $3.11 and also $3.24 thus far today. Volume today is low-grade. Thus far 2,709,253 shares have actually traded contrasted to ordinary volume of 8,102,492 shares.A Lot More Concerning Clover Wellness Investments Corp. Clover Health And Wellness Investments Corp is a healthcare modern technology business. It uses its exclusive innovation system to accumulate, framework, as well as assess wellness and behavior data to improve medical results and also reduced expenses for clients. Clover Health Investments (CLOV) Scheduled to Blog Post Quarterly Revenues on Monday. Clover Health Investments (NASDAQ: CLOV - Obtain Rating) will certainly reveal its incomes outcomes after the market closes on Monday, August 8th. Analysts anticipate the business to reveal incomes of ($ 0.23) per share for the quarter. Clover Wellness Investments has actually set its FY 2022 support at EPS.Clover Health And Wellness Investments (NASDAQ: CLOV - Obtain Rating) last provided its profits outcomes on Monday, May 9th. The firm reported ($ 0.19) incomes per share (EPS) for the quarter, covering analysts' consensus quotes of ($ 0.24) by $0.05. Clover Health And Wellness Investments had a negative return on equity of 112.18% and also an unfavorable net margin of 28.64%. The firm had income of $874.38 million for the quarter, contrasted to analysts' expectations of $815.42 million. On average, experts expect Clover Health Investments to post $-1 EPS for the present fiscal year and $-1 EPS for the following . Clover Wellness Investments Price Performance. Shares of NASDAQ: CLOV opened up at $2.80 on Monday. The company has a current ratio of 1.16, a quick proportion of 1.16 and a debt-to-equity ratio of 0.04. The stock's fifty day basic relocating standard is $2.46 and its two-hundred day basic moving average is $2.71. Clover Health Investments has a 1-year low of $1.95 as well as a 1-year high of $11.13. The stock has a market cap of $1.33 billion, a PE proportion of -1.92 and a beta of 1.75. Institutional Inflows and also Discharges. Numerous large capitalists have recently added to or reduced their risks in the stock. Lead Team Inc. boosted its risk in Clover Health and wellness Investments by 0.8% in the first quarter. Lead Group Inc. currently possesses 26,087,528 shares of the business's stock worth $92,611,000 after buying an additional 200,177 shares throughout the period. BlackRock Inc. grew its risk in Clover Health and wellness Investments by 6.2% in the very first quarter. BlackRock Inc. now possesses 5,681,089 shares of the business's stock worth $20,168,000 after purchasing an extra 329,673 shares during the duration. Goldman Sachs Team Inc. expanded its stake in Clover Wellness Investments by 56.9% in the very first quarter. Goldman Sachs Group Inc. now possesses 2,199,256 shares of the firm's stock worth $7,807,000 after buying an extra 797,158 shares during the duration. State Street Corp enhanced its holdings in Clover Health Investments by 8.0% in the very first quarter. State Road Corp currently has 1,932,734 shares of the business's stock worth $6,861,000 after obtaining an extra 142,690 shares in the last quarter. Ultimately, Charles Schwab Investment Management Inc. increased its holdings in Clover Health and wellness Investments by 2.4% in the initial quarter. Charles Schwab Financial investment Monitoring Inc. currently has 1,369,743 shares of the business's stock worth $4,863,000 after obtaining an added 32,755 shares in the last quarter. Institutional capitalists possess 23.26% of the firm's stock.Clover Wellness Investments Company Profile (Obtain Rating).Clover Wellness Investments, Corp. runs as a medicare benefit insurance firm in the USA. The firm with its Clover Aide, a software application platform that gives favored service provider company and health care company health insurance for medicare-eligible consumers. It likewise focuses on non-insurance businesses.

Netflix Stock has had a dreadful 2022