Fortnite’s Last Laugh set, which features the popular Joker skin from the DC universe, was released in Season 4 of Chapter 2 at a price of $29.99. Now, Epic Games has reduced the price for the set back to $20.09, over 9$ cheaper than when it first came out. 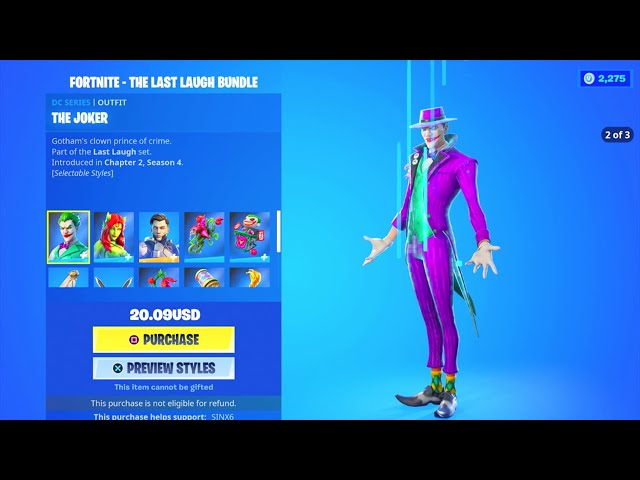 The question on every customer’s mind is, will they receive a refund since they paid 9 more dollars than someone who can purchase the bundle now? It’s unclear if this price reduction is a temporary type of sale released by Epic Games or if it will last indefinitely.

As of today, Epic Games has not released any sort of comment on Fortnite’s Last Laugh Bundle or if anyone will be reimbursed for the difference in its cost now.

The bundle has been in the game for practically 4 seasons now, allowing ample time for any DC fan to grab the Joker and his kit for 30 bucks.

The Last Laugh bundle is On Sale, could this mean it could be finally leaving the shop soon after 3 seasons 👀? #Fortnite

Fortnite players have stated that the price reduction is indeed an in-game sale for others to grab the Last Laugh Bundle at a cheaper cost. A few official Fortnite social media accounts are also advertising the cost change as a sale, but players who purchased the bundle at its full price may have been shortchanged out of tangible money.

Those who purchased the bundle for $30 might suffer from poor timing, but some disgruntled Fortnite players are complaining and calling for a refund. The bundle differs from many other skins in the game since players have to spend the actual currency instead of the in-game V-Bucks to purchase it.

@FortniteGame
Can I get a refund for my last laugh bundle now that it’s 10 dollars cheaper??? 😡😡😡

With unique cosmetics dropping in Fortnite, players would love to spend that extra $9 dollars on something like the Ariana Grande skin or other featured items in the shop. Since the Last Laugh Bundle is widely referred to as a sale, it’s unlikely anyone who purchased it at full price will receive any sort of reimbursement.

Fortnite has been holding the bundle in its shop for months now, so the price reduction released for it may indicate its departure from the shop. Grab the bundle while it lasts for almost a third of its price slashed as a discount.

iphone 12 – How to Get a Free Samsung Chromebook